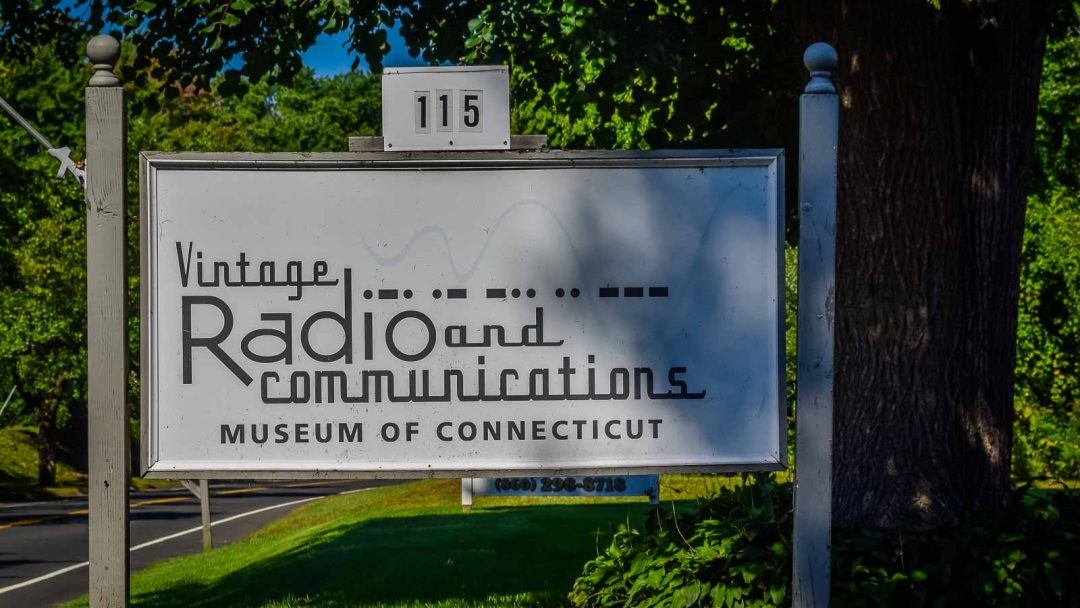 I discovered the Vintage Radio and Communications Museum on a beautiful day after a period of weather that included a lot of rain and grayness. I wanted to go on a road trip. A brown sign trip road trip.

For the uninitiated, I am addicted to brown signs. I just love them! Brown signs are my gateway to discovering new and interesting people, places and things.

A brown sign in the United States is a sign that has a brown background color with white lettering that signifies a point of interest, like state and national parks, museums, landmarks, etc… I always figure that if something is important enough to make a brown sign for it, then it must be something worthwhile to see. I follow brown signs like Dorothy followed yellow bricks in the Wizard of Oz.

On this trip, I decided the direction of travel by designating a cardinal direction (NSEW) to a number, then rolled a die. I was hoping for anything other than east, as there is not much land between my starting point and the Atlantic ocean being in Ct and all.

As it turns out west was the direction that was rolled. I looked at Google Maps and spanned it out and I saw that Albany NY is west, and thought it seemed as good a place as any to go visit. 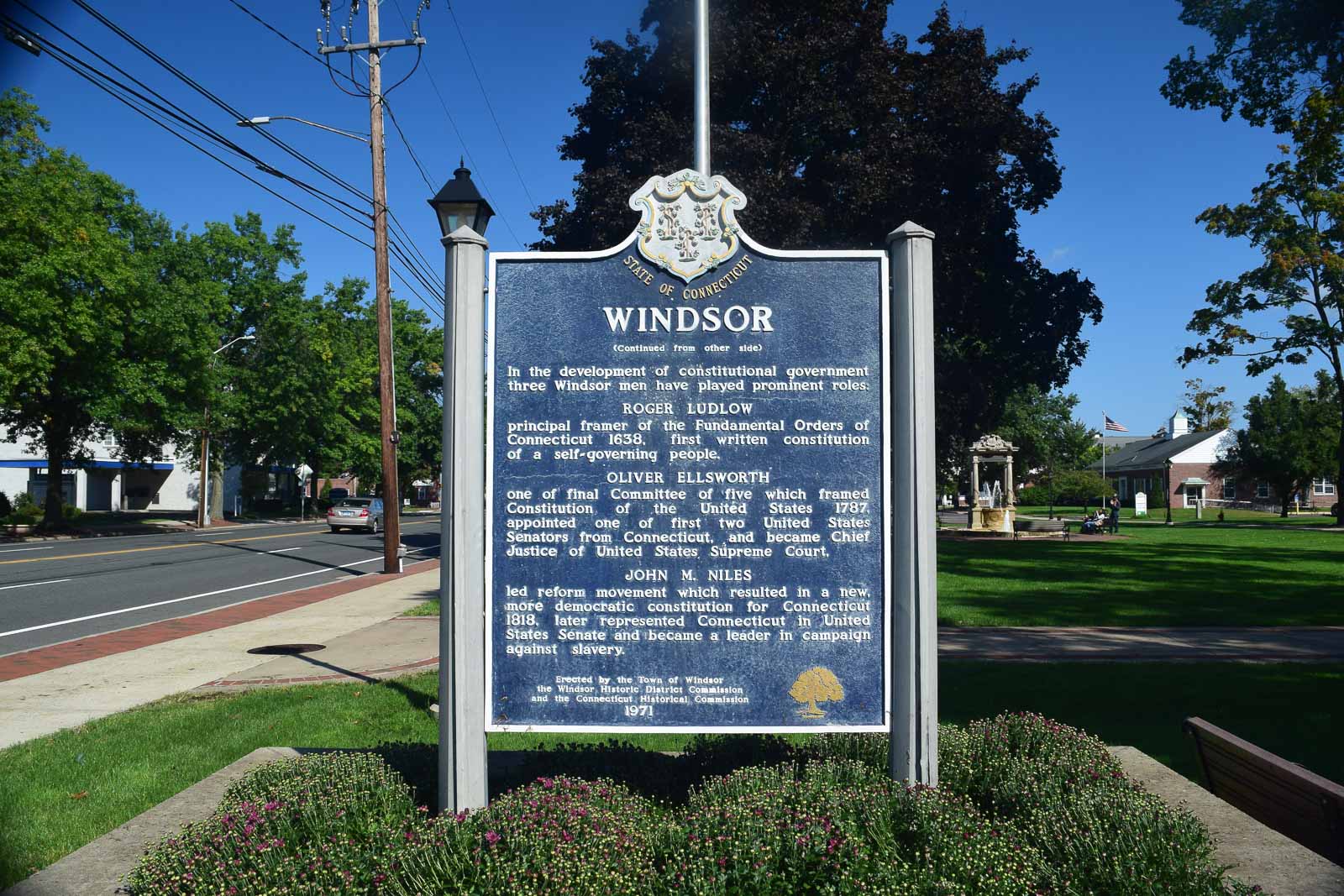 I had also decided beforehand that stopping at the first brown sign attraction I had not seen yet was a good idea.

As it turned out, the very first brown sign I came across that I hadn’t visited yet was only two towns over. It said Vintage Radio and Communications Museum located in Windsor Connecticut.

Honestly, I really wasn’t expecting a lot. I have been to a few smaller specialized museums which ended up being super small, not well interpreted and lacking substance but then again I have discovered some super awesome gems over the years. You just never know, it can be a crap shoot.

I figured it would take 15 minutes to see the whole museum and I would be on my way to Albany.

The admission charge is $10 a person.

After paying for admission and going through the museum, the realization hit me within about 5 feet that this place was much bigger than was anticipated. Not only was bigger, it was much more comprehensive than I would have thought.

The museum got its start because there was a guy who collected antique radios. As all serious collectors or arts and crafts people know, space becomes a precious commodity, it borders on hoarding, of which I am guilty on the arts and crafts. When you think about it, what better thing to do with your collection than to share it with the world? Here it’s way better than hoarding everything in a storage facility some place. 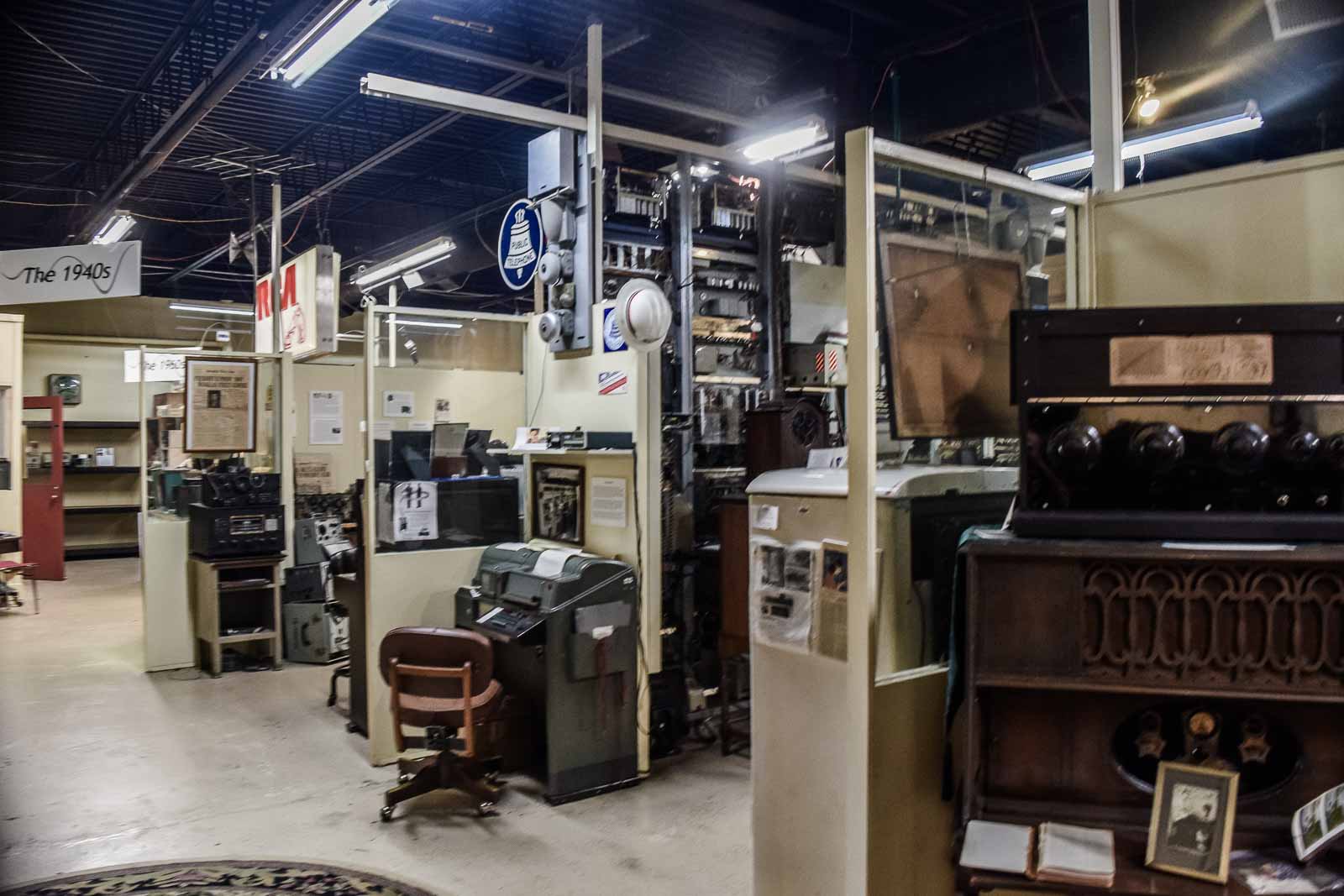 A Vintage Radio Hoarder’s paradise. Row upon row of shelves upon overflowing shelves. But tasteful and well organized.

It’s just a hunch but I suspect that the founder might have needed storage space for his awesome collection and he opened a museum. Evidently when he opened the museum, he received donations of equipment from all over the place. In fact, they get so many antique radio items they sell a lot on eBay to help fund the museum.

There were multiple people there willing, and I would say, excited to provide a well-interpreted tour. I believe that our guide was a volunteer and an obvious enthusiast. His name is Mark and he was awesomeness! 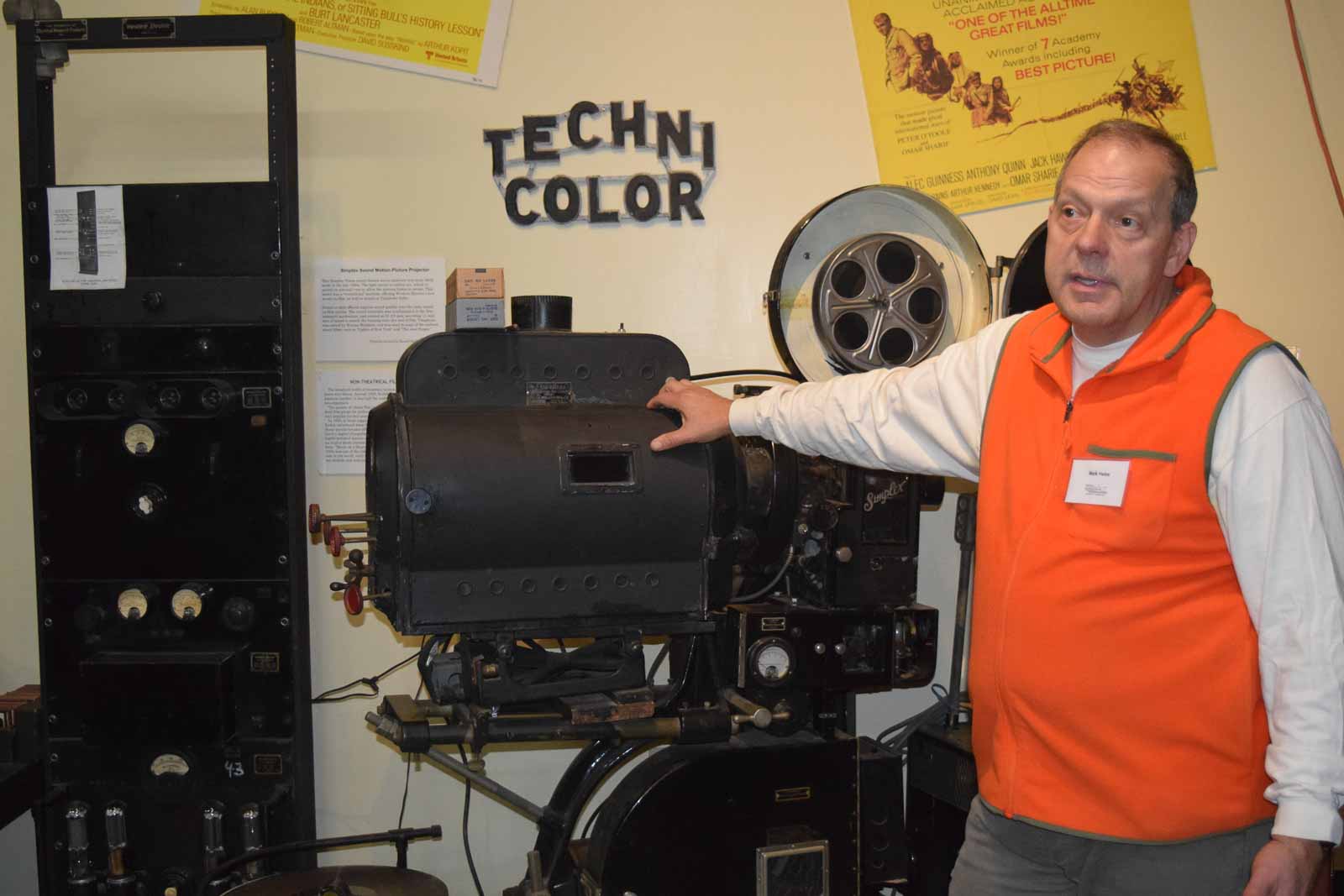 Mark provided one of the best interpreted tours I have ever been on and and I have been on a lot of tours. His depth of knowledge was impressive. What ever he didn’t know there were others there that were all too happy to impart their knowledge. You got the feeling that this place was protected by one big happy family. (In a good way, not a creepy way)

Chronologically organized presentation from the 1800’s to modern times

The museum is set up so that it provides a glimpse of communications technology throughout time. The museum is situated so that each row roughly makes up a new decade. They have technology represented from the 1800’s including telegraph machines, all the way up to modern times. There is even a working radio broadcast studio and a ham radio station there as well. 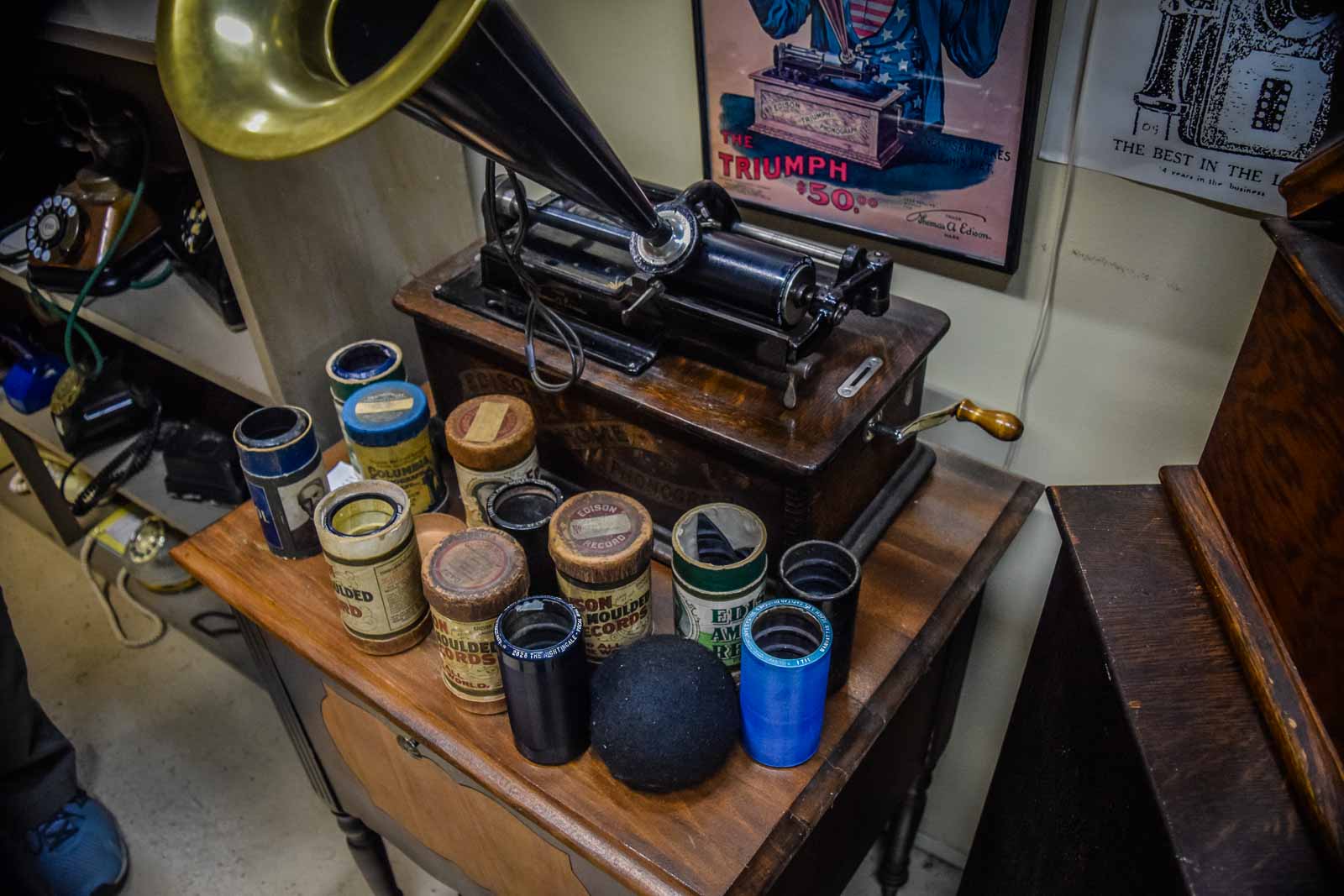 Early phonograph that used wax tubes instead of disks. It sounded surprisingly good!

The museum is equipped with lots of really cool things. The highlight for me, was Tesla’s lightning rod thingy ( in working order). ( Yes, I know thingy is not a really technical term but it works) You know that famous picture of Tesla sitting in a chair with electricity arcing over his head? Yeah they got those.

They provided a demonstration, turned off all the lights and then they turned it on. The electricity sparks and makes a really loud snapping or better yet a zapping sound. Bolts of electricity arc up towards the ceiling. Then they hand you a stick (I like to think a magic stick) with a metal ball at the end that you can capture the bolts of electricity. It made me feel like a mad scientist or a superhero who could hold the awesome power of lightning in her hands. I found the experience rather empowering. 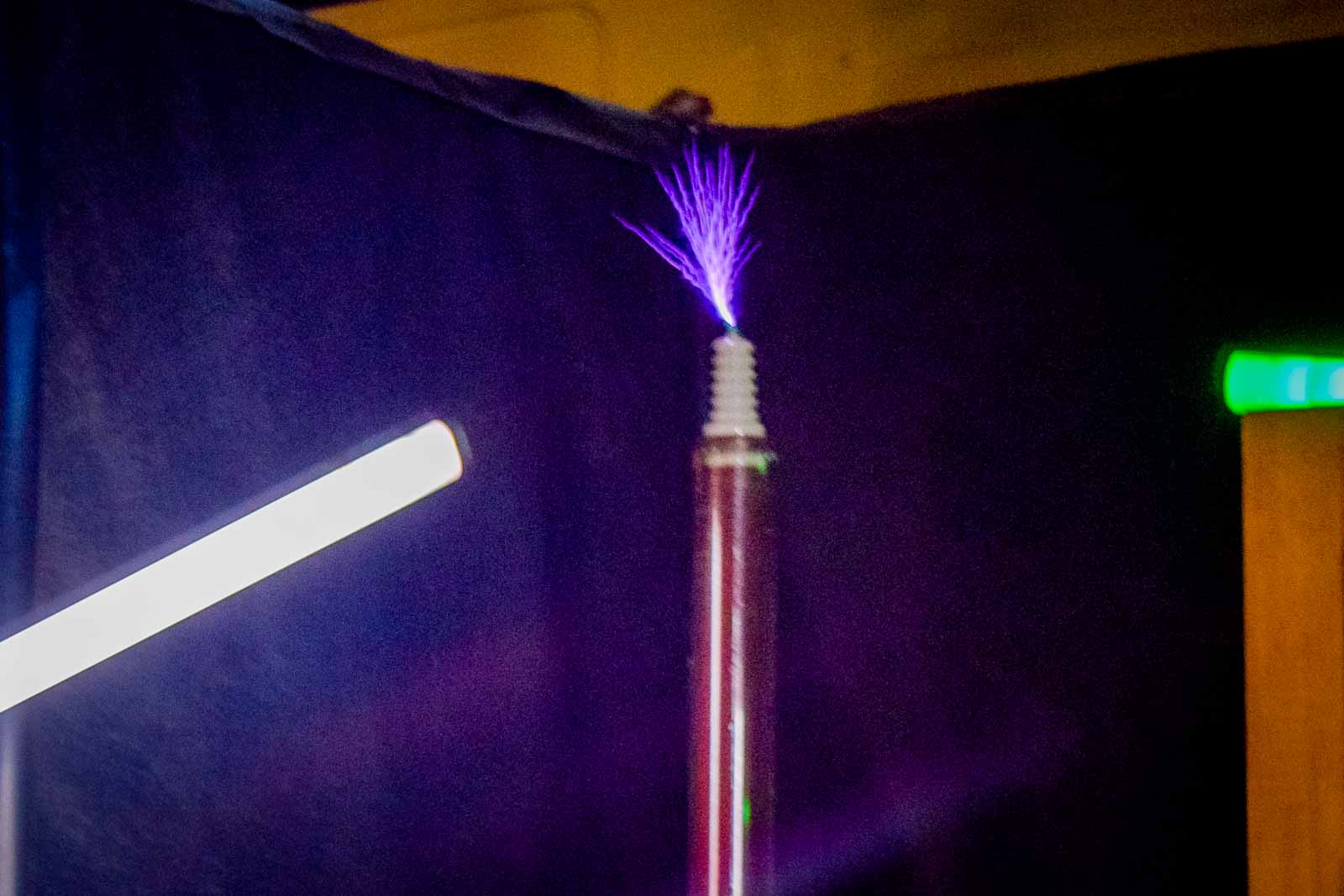 The Tesla coil was my favorite part of this museum

They talked about how Tesla really wanted to provide the electricity AC current, free to everybody. There were pitfalls to the plan, you will have to go to the museum to find out all about it. They then took a fluorescent light bulb and placed it close but not touching the electricity generator and it lit up.

The tour guide, a volunteer, was a wealth of information

We were lucky to have Mark as a docent who brought us around. He warned us in the beginning of the tour that he could talk for hours and hours about everything in the museum. He did indeed talk for hours and hours; he did it in a way that didn’t make me bored or make my eyeballs roll in my head because the information was too technical or dry, he was really good. Again, there are multiple people there that were affiliated with the museum and you could tell that all of them had a passion for the place which always makes it more exciting. 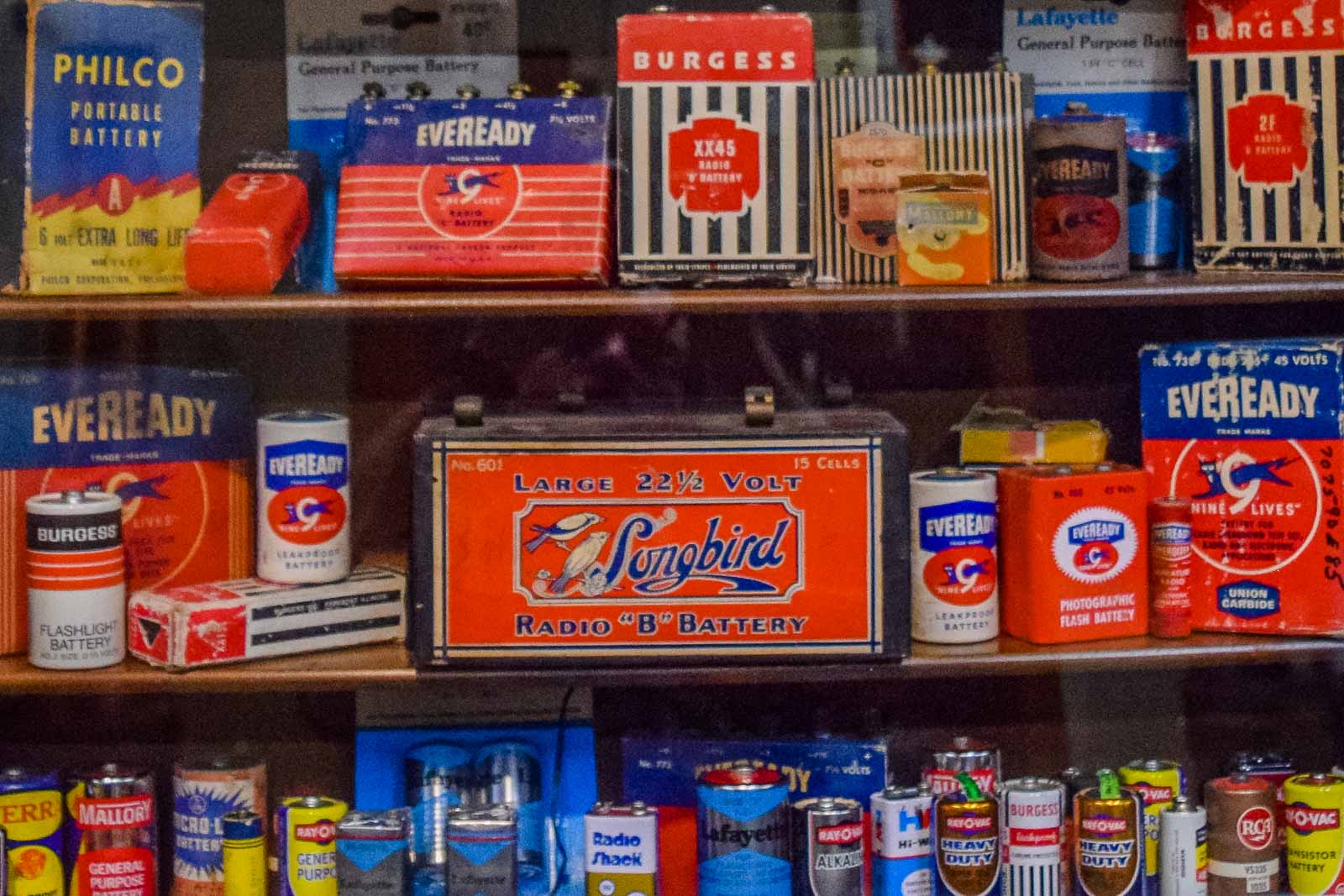 Display featuring the batteries of yesteryear

If you like old antique radios, telegraph machines Tesla stuff, TV’s, jukeboxes, old phonographs, then this is the place to go. They have some really cool stuff. If you love US history, then this is also a good pick for you. Not only does it talk to the history of the technology but also of the history of the United States by giving you some insights on how communications impacted people’s lives over the years.

If you visit Connecticut, I highly recommend this wonderful gem of a museum, located only 7 miles from the Bradley International Airport hotels.

If you are cleaning out grandma’s basement or garage or attic and come across any interesting communications equipment or radios, please think about donating them to the museum.