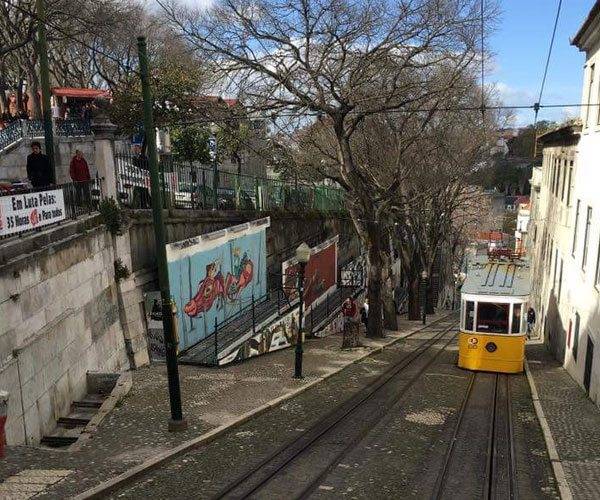 Doing my laundry again, so I’m utilizing the time by posting another blog post. One of the touristy things people tell you to do is to take the 28 tram around Lisbon. I was in Lisbon a few months before I got around to it.

Every local that I talked to about it said ‘Yes you should do it but watch your purse. It is where the pickpockets are. The driver will announce it because they know who the pickpockets are.’ As with all mass transit in Portugal, it is inexpensive to ride on the Tram. You can get a ticket ahead of time or you can pay the driver when you board. I’ll do a PSA on transportation later on.

These trams are only marginally better to ride on then the ones in San Francisco. No offense to all the fans of trams and cable cars which I lump in the same category but they are ridiculously loud and the seats are uncomfortable. It is off season and I’ve been here long enough to figure out that the trams are packed most of the time.

Every local that I talked to about it said ‘Yes you should do it but watch your purse. It is where the pickpockets are.

I figured the best time to go would be a weekday, after rush hour, off season. I was wrong. It was packed. I will say if you are lucky enough to get a seat on the Tram, the seats do have padding which do make them a bit more comfortable than the San Francisco trams. There were so many people on the tram I was unable to see any of the historic buildings or neighborhoods that the 28 tram takes you through. I was eventually able to get a seat but immediately gave it up when an older lady got on the Tram with a cane. It wasn’t a good seat anyway for site seeing it was facing into the isle so I got a really good view of a person’s belt while I was sitting there.

I love to do kitchy touristy things, however, Trams always leave me a little disappointed. I do realize that not everyone’s experiences are the same as mine and you could have experienced a quiet and comfortable ride on a tram, however I doubt it. That’s not to say that I would never do it again if I was hosting someone in either place and they really really wanted to do it, I would go, but I don’t think I will be seeking out for myself in the future as a fun touristy thing to do. If you are that person that needs to do the touristy things because everyone tells you to do it, by all means, take the tram and enjoy the back of somebody’s head, if not, I’d pass on the opportunity. I’ll leave you with this, the place where I hopped off the tram, there were several tuk tuk drivers. One as doing a good job trying to drum up some business by yelling to the people on the street in good English, ‘Take the tram if you like being squished up like a can of sardines otherwise take a tuk tuk!’ I had to smile in agreement.