People from the Road – Meet Chris – Sometimes the Dark Side can be Light! Muuuhahahahaha 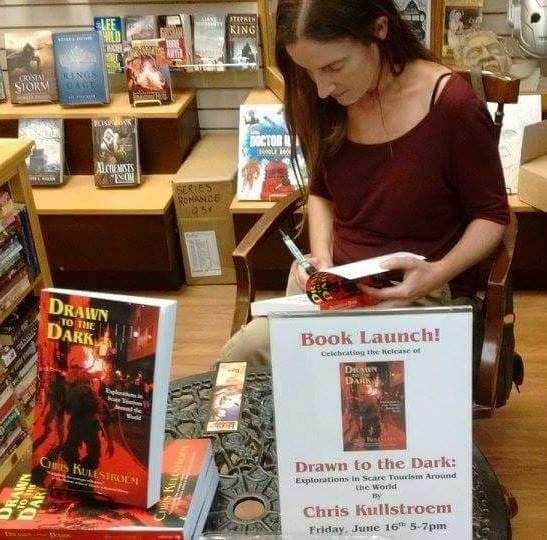 I met Chris years ago through local Couchsurfing events. While I was wandering about the United States by myself, I was watching Chris wandering around the world by herself. That trip made her a personal hero of mine. Every week or so, I’d see her Facebook posts about a new fantastic destination that she traveled to. Chris had an affinity to characters and legends that scare people. While in the US, I’d look up all of the different posting about events, monsters, and places that she had been. It really sparked my imagination.

When Chris made the decision to pursue her life-long passion into the discovery of things that go bump in the night,

she explored the far reaches of the world to experience different cultures through their scary monsters, legends, and myths.

Chris spent a year planning, saving and researching where she was going to go. She decided to quit her job and went on the proverbial road. There was no turning back for her, she was resolved and fearless. She traveled solo around the world for a full year.

After she returned to the United State, she wrote a book about her experiences traveling the world and exploring scare tourism titled, “Drawn to the Dark: Explorations in Scare Tourism around the World.”

I had asked her if she’d let me interview her for my blog and she was wonderfully excited to do the interview, especially during her favorite month that contained her most favorite holiday of the year, Halloween.

When asked about her favorite destination on her personal Scare Tour. Her response was “Transylvania.”

“Was it because of Vlad the Impaler or the birthplace of the vampire legend?” I asked. Her response “Both. In every tourism destination I went to look at either one, the fictional or the historical, both were presented. I loved it.”

She went on to say that the country is outstanding beautiful, the people were kind, and the food was wonderful. It was the draw of being in that place that really began it all for her with Bram Stoker’s Dracula. She loved the lore and mystique around the entire country.

Chris did a nice job in her book explaining who Vlad the Impaler really was. Her account of the castle and the history of the place really made me want to go there.

Many of her scare tour destinations had theatrical shows depicting the legends of the monsters or scary legends that made it famous. Transylvania was no exception. Chris indicated that she found the most unique and out-of-the-way shows there. 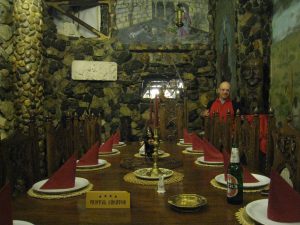 Chris provided a few tidbits that the average tourist may not discover on their own. She described how one hotel, the Hotel Castle Dracula, has a show held in the basement. This particular show was not advertised anywhere, and the hotel maintained a secretive posture about the show.  She only learned about it by asking the hotel staff. You had to go and specifically ask for the show. Otherwise, you’d never know that one existed.

Chris also gave two thumbs way up for a restaurant called Hunter Castle in Romanian, also known as Castelul Printul Vanator in Romanian. The restaurant had an upstairs room all decked out with Vampire stuff.

If you decide to travel to Transylvania, read her book first and give these two places a shout out when you visit there.

I asked Chris, “What was the most endearing legend or monster to you?” 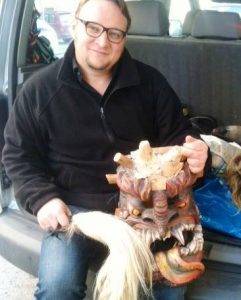 Her immediate response was “Krampus.”

Having read her book, I was shocked to hear that.

While in Austria, there were fantastical parades and shows to celebrate the Krampus. According to her host, in Austria, the scary horned beasts that were the Krampus, initially were believed to keep evil away in winter. “Once Christianity spread, Krampus became the evil companion of St. Nicholas.” On December 5th St. Nicholas would travel door to door and give treats to the good children, but Krampus was there to take the bad children away.

Over time, the parades and processions meant to celebrate the legend of Krampus started to include some severe treatment of the parade goers. The Krampus would beat the parade bystanders with tree branches and other sundry other items. Evidently, the Krampus could tell who needed a whipping and who didn’t.

I asked Chris, “Why was Krampus endearing?” She loved how the legend of the Kampus dates back centuries.

For her explorations and research into the Krampus lore, she did acquire a few whacks on her legs, one of which resulted in a nice bruise. She wore it with pride, like a battle scar.

I asked her if any of that surprised her. She indicated that she was not really expecting it to hurt so much. She figured that nobody would come out to the parades if they knew they were going to get hurt. As it turns out the Krampus events were very well attended. People were lining up to get whacked by a Krampus. Her bruise hurt like crazy—but only for a few seconds.

We commiserated on how many different cultures keep fear in people minds through these characters. 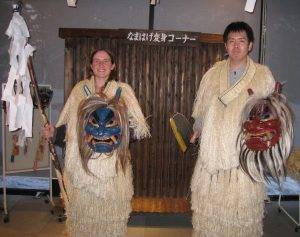 Chris and her Couchsurf Host, Hiraku dressed as Namahage in Japan

I inquired, ‘As a single female traveler, did you encounter any problems or sketchy situations that made you afraid or fear for your life. Her response was simply, “No. Everywhere I went, people were so kind and excited to share their culture with me. They were as excited about the purpose for my travels, as I was!”

Do you like traveling alone? Her response was emphatically, “Yes! There is something wonderfully liberating about being able to set your own agenda. Half of my destinations were chosen on the road, both from doing research and learning about new shows from others

“What is one take away you want to impart to whoever reads this blog?”

Chris paused and said, “People see what’s in the news and get scared, but that’s not everyday reality. Everyday normal people are honest, good people. People shouldn’t believe what they hear in the news represents an entire nation.”

Chris also wanted to encourage people to step outside of their comfort zone and what they think they know. She hopes to inspire people to travel and experience other cultures, get to know the local people. It’s a sure-fire way to make new friends for life.

I loved the book. Even if you don’t think that scare tourism is your thing, I’d encourage you to read it anyway, especially if you love to travel. The book is packed with valuable cultural content and excellent observations about places that she visited. Due to reading her book, I now have Florence Italy and Kyoto Japan on my bucket list.

Her book is available through all major online outlets as well as Barnes and Nobles. It will make a great Christmas gift for any reader, but I suspect teenagers would love this book.

What’s next for Chris?

Chris is working on her fifth book.

Last October, she traveled up the eastern United States throughout the Halloween season to experience modern scare attractions. Her new book will cover the history of Halloween over the past few centuries as reflected in these modern attractions. 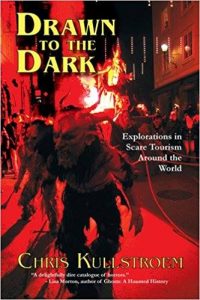