Lost River Caverns – Off The Beaten In Hellertown, PA 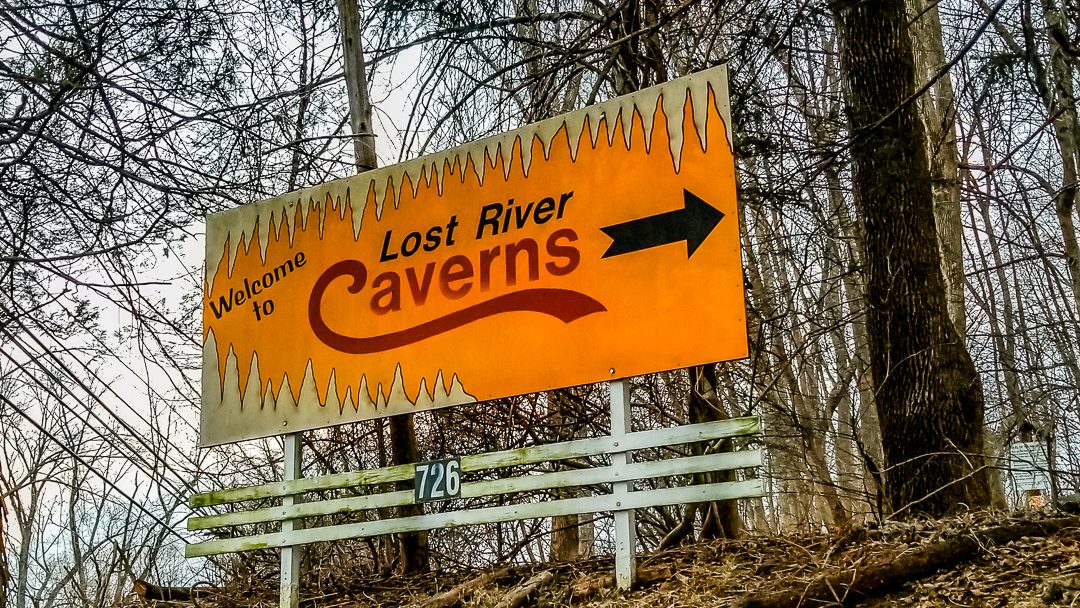 I was recently visiting a friend In Bethlehem, PA. As I always do on a road trip, I check to see if there are any fun and interesting things to do or see in an area. This brought me to  Lost River Caverns, in Hellertown, Pennsylvania.

Upon learning about the caverns, I thought, “hmmmmm, I like cave attractions, I will go forth and see what there is to see.”

Getting to Lost River Caverns

Driving along to my GPS instructions, I could see that l getting close to the attraction.  I was surprised to find myself driving through a densely populated suburban area. Any caves and caverns I had visited in the past had been in rural, isolated areas. Don’t let that throw you off. Google maps will take you right to the attraction without any problems.

More to offer than just caverns

When you get there, you can immediately see that this attraction has more to offer than just the caverns. There is a sluice where you can buy a bag of stones and sift through them to find treasures. There is also a nature walk to allow you to explore and enjoy the property. I imagine this would be a great place to bring children for an afternoon of fun or to break up a road trip.

As you walk into the gift shop to get your tickets for the cave tour, you are greeted by a nice person who informs you that you pay at the end of the tour. Your eye is immediately drawn to the right where there is this wall of vegetation with some cool very large plants, some animal replicas, and a dinosaur. Then you notice that the gift shop is down at the bottom of a ramp. They have a nice selection of rocks plus jewelry settings for your rocks. Along the wall, is a row of taxidermied animal heads. Which always makes me smile in spite of myself in a place like this because my sons would always quote the movie, Ace Ventura Pet Detective. “What a lovely den of death you have here.”

You go along down the ramp to discover that you can’t get to the gift shop without someone letting you in. The day I went they were running the tour in 15 minutes of me getting there. The tour is approximately 30 minutes long.

My guide was the lovely Maria. She was awesome and entertained my gazillion questions with patience and grace. As you can see in the photo, I am still working on my selfie skills. 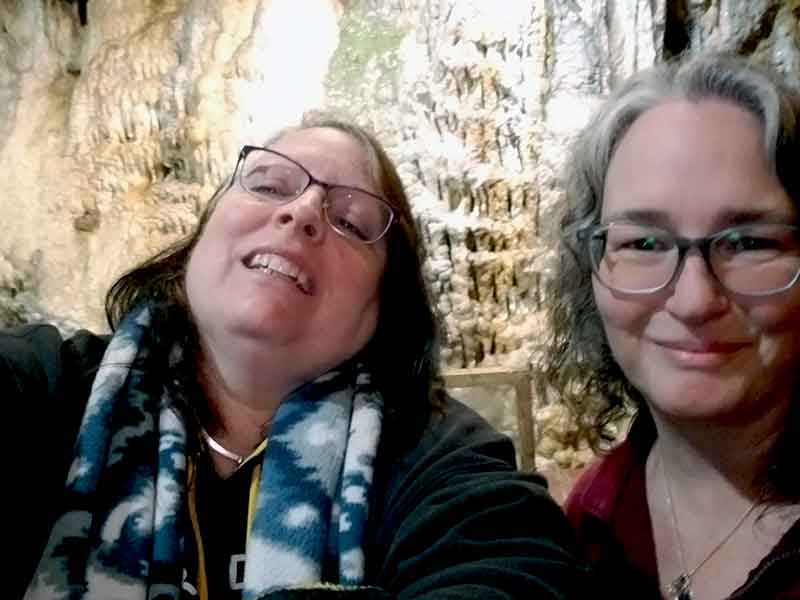 Margaret, and the knowledgeable and funny guide Maria

I learn something new every time I go to a  cave or a cavern. Researching this blog, I discovered that there is a difference between a cave and a cavern.

According to an article on the internet (see link below) “This means that if the hollow or the opening is on the surface of the earth then it is a cave whereas if it is under the ground then it is advisable to refer to it as a cavern.”

Does that mean if a cavern ceiling collapses that it is a cavern-in?

There is more to it, and you can read about it here on this link. http://www.differencebetween.net/miscellaneous/difference-between-cave-and-cavern/

This is a wet cavern with an active build-up of Speleothems ( https://en.m.wikipedia.org/wiki/Speleothem) or cave formations like stalagmites and stalactites.

My favorite cavern formation is the famous cave bacon of which you can have in this picture. They also have a formation called ‘Shark Teeth’ which eventually will most likely become cave bacon.

The caverns were discovered in 1883 and used to quarry limestone for iron and steel production. Eventually, the caverns became the property of the Gilman family in 1929 when the caverns were opened as an attraction for the public. The caverns are still operated by the family today.

Maria told me about cave kisses. When there is dripping water in a cave and it lands on you, that’s a cave kiss and I was kissed A LOT.  There had been an extremely high amount of water in the area due to recent rains. The lost river was so high it was blocking being able to see one of the chambers.

When you get into the chamber called the Crystal Chapel. You can see that the chamber was set up to hold events, including weddings and christenings. If you have dreams of being married in a cave, sorry this cavern no longer allows special groups and has stopped these events because of too many bridezillas to contend with. 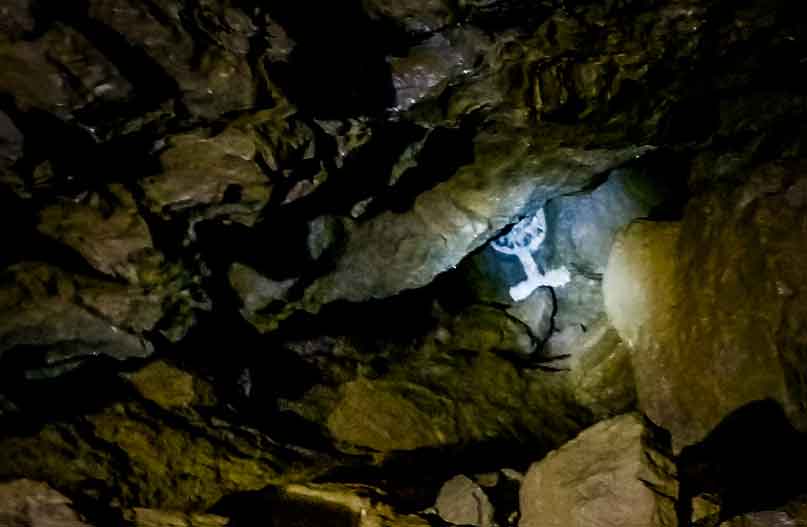 Tag leftover from a fraternity pledging

Maria also pointed out where a local fraternity used to initiate people by bringing pledges into the cavern with a box of matches and they would leave them there to find their way out. The frat tagged the caverns as seen in this picture.

The temperature in the caverns is a constant 52 degrees. It’s nice in winter but I find it chilly in the summer. If you visit in the summer bring a jacket, you will need it.

I was surprised by the many different colors presented in the cave. Most are products of mineral deposits but a very green one was due to algae. 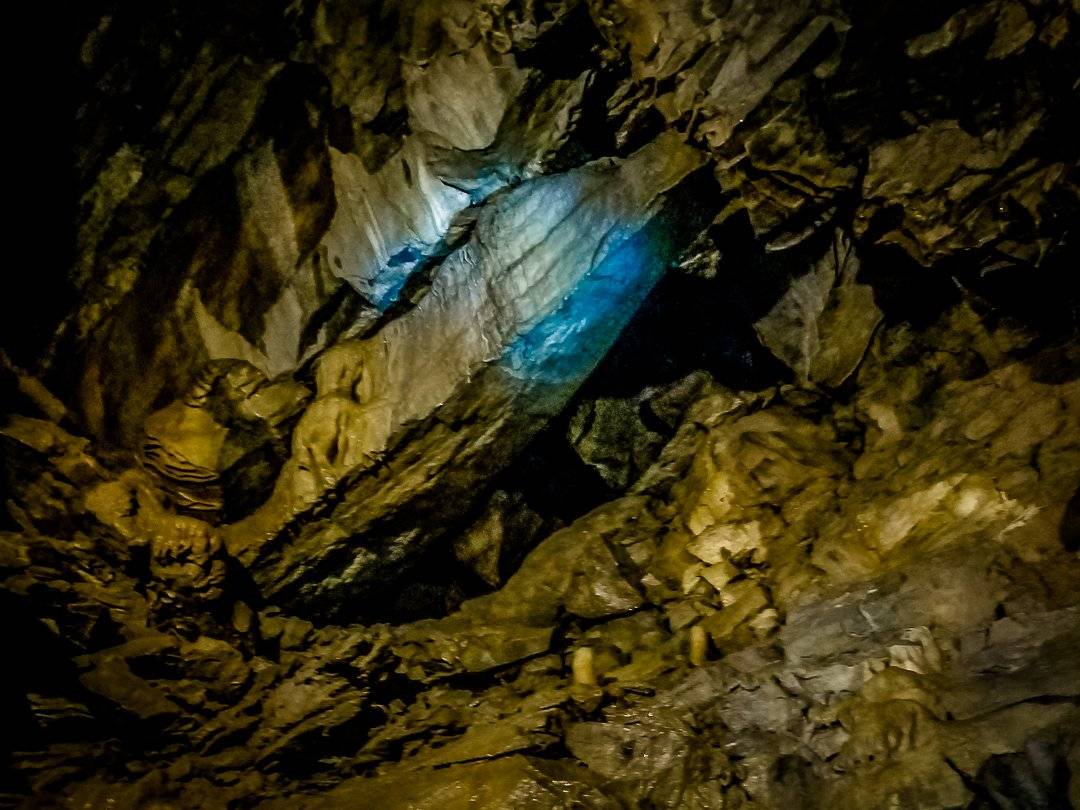 They had flowstone which looks like mud and I was expecting it to be super slippery but it is hard as concrete. I was delighted to see the cave bacon. They also have shark teeth which generally become bacon after several 100 thousand years or so. 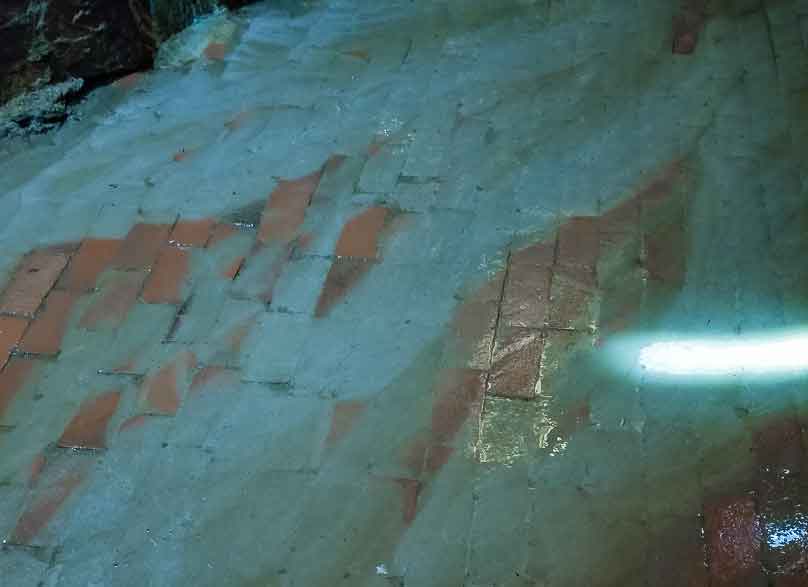 Flowstone looks slippery, but it’s not

There is a formation that is known as a turtle because it looks like a turtle.

One of the cool aspects of the tour included phosphorescent rocks. She turned out the lights and put on a black light. As you can see in the photo, the rocks glowed with amazing colors. Pretty cool, right?

Like many things on my travels, I learned that phosphorescent rocks occur naturally in New Jersey by reading the side of a U-Haul truck. I like to think of U-Haul as the Wikipedia of the road.

As New Jersey is the next state over I asked if the rocks were from there. Maria answered that while she thought one of the minerals were, the rest were from elsewhere in the world. I found out about these types of rocks on the side of a Uhaul truck. Being a bit of a rock hound, I am excited about the prospect of mining some of these rocks soon. I am sure that is another blog for another time. The rocks were a nice added bonus for me.

Then Maria pointed out a section of the cavern wall that glows and looks like an outline of a creature of some sort shown of the picture below. It’s naturally occurring but it kind of looks like a Kokopelli to me.

Due to the rain, one of the chambers was closed because it was underwater. They were pretty awesome about it and discounted the ticket because it wasn’t the full tour. I thought was good of them to do.

All in all a positive experience and I  would recommend going there during the summer months with the kids. If you want to round out the day you can also bring the kiddies to The Crayola Experience in the next town over.

Getting to the Caverns 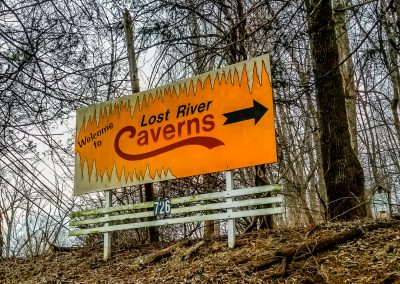 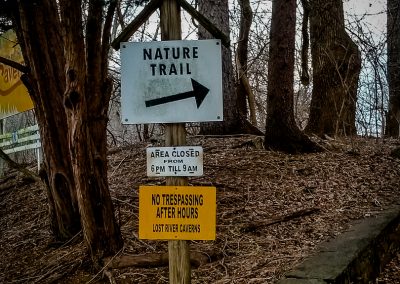 Nature Trail to explore and enjoy the property 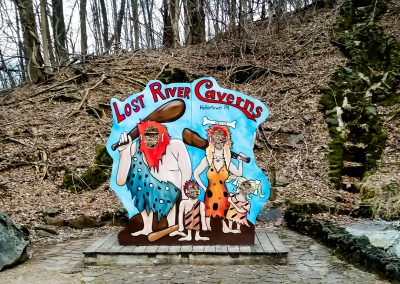 Take a picture with the kiddies 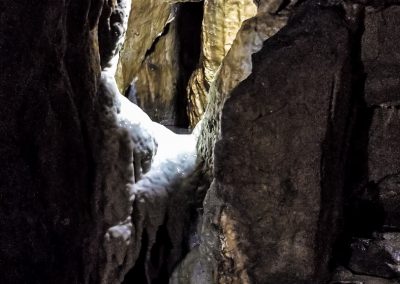 A view into another chamber 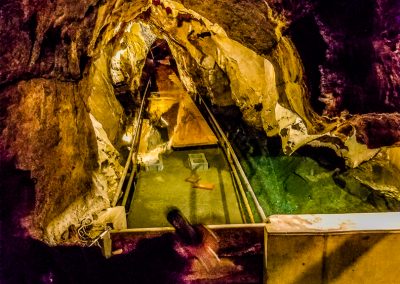 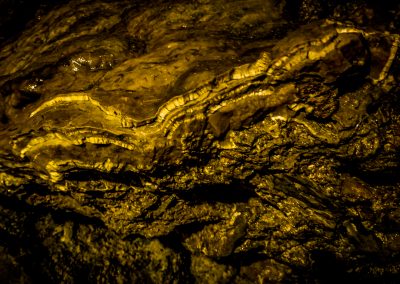 The layers of the formations over time 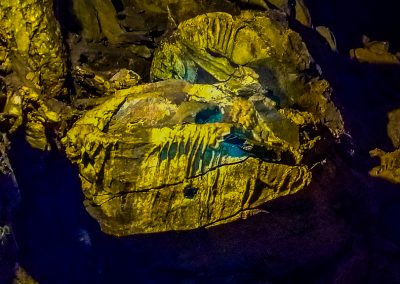 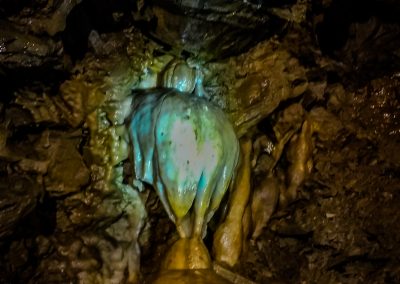 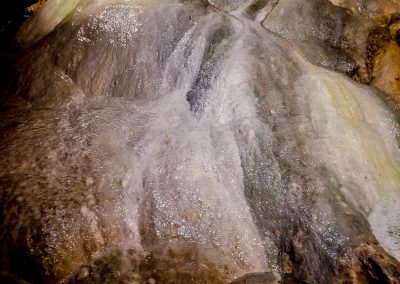 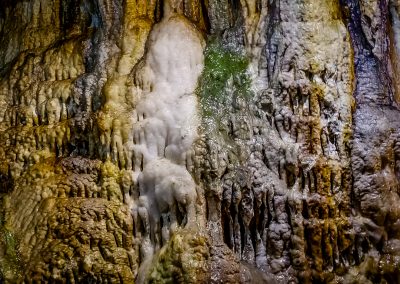 A nice range of colors on the cave formations 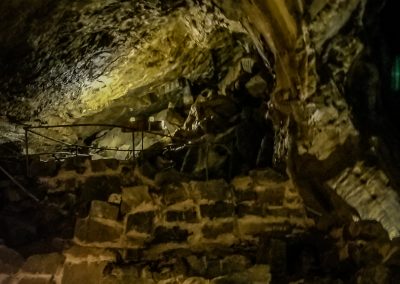 Crystal Chapel, where events were once held 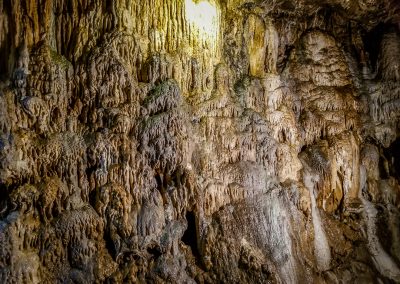