I had the pleasure of going to Mt. Diablo State Park near Walnut Creek CA. The park boasts some of the biggest and farthest views from the top of the mountain. It was rumored that the view was only bested by Mt Kilimanjaro in Africa. That rumor was debunked however it does have the best and farthest view in the Western US.  The ride up to the top of the mountain was lovely. I always get a kick out of folks that talk with confidence about land marks that they could see. It was always hard for me to pick those things out unless they were undeniable and easy to see. I did hear people say excitedly “Oh look honey there is the Bay bridge and look that way, there is Sentinel from Yosemite Natl Park. I could see the bay and a lot of lovely expanse but that was about it.

Much of the drive to the top showed beautiful countryside like this.

This mountain was a sacred area for the native people of California. The mountain had been known by different names most recently there was a campaign to change the name of the mountain to Mt Reagan after president Ronald Reagan. Ultimately the idea was rejected and is continued to be known as Mt. Diablo. There was not much detail about how the mountain got it’s permanent name. there was a footnote indicating that at sunset the mountain glowed red, hence that name mountain of the devil. There was another note that said that someone misinterpreted the word that the Native Indians used to call the mountain. I got to hike a bit and the sandstone rock formations were fun and funky with lots of cracks and crevasses. The stone was soo soft that a lot of people carved out their mark on it. 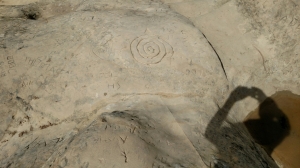 Early on in the excursion I was informed by my host that there is a flower that the only place where it grow in the entire world is Mt. Diablo. But he could not remember the name of it. I went into the visitors gift shop at the top of the mountain and a nice but very busy ranger pointed to this painting on the wall when I inquired about the flower.

The search was on! For the elusive Mt Diablo Fairy Lantern. I was totally enamored just by the name of the flower, I just had to see one!

We stopped multiple times as we headed down the mountain anytime I saw a spec of yellow on the side of the road we stopped to investigate. On the first stop I found this. 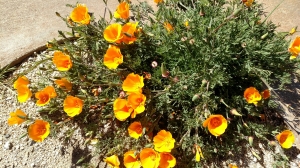 Then on another stop I found so many more but not the Fairy Lantern. My host looked up some facts about the Fairy lanterns – they are also called Globe Lillies but I prefer Fairy Lanterns. They are also very picky about what elevation they grow in and that gave us an important clue! Then I saw something different on the side of the road but the road was sooo tight and twisty that we had to park a little ways down at a turn out and back track. When we got to the place where I thought I saw something different – I didn’t see it right away and was loosing hope that I could see the Fairy Lantern in real life. My host’s eagle eye spotted it and there it was THE Mt. Diablo Fairy Lantern!!! After the requisite high five we found several others. I felt very specikal. (Yes that is a made up word we use in my family) The event was sooo momentous that on the recommendation of my host, I pinned a location on google maps called Mt Diablo Fairy Latern Sighting in the other category so you too can find the Fairy Lantern if you are in the area. 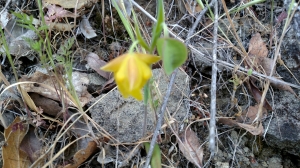