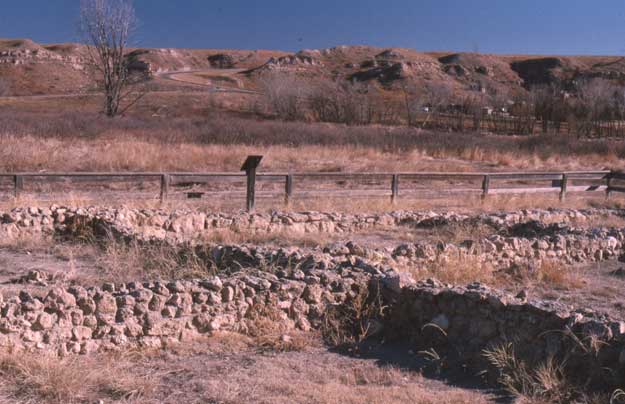 When I was traveling in western Kansas camping at Lake Scott State Park. There was an opportunity for me to see a historic site of indigenous people known as the El Cuartelejo Indian ruins.

El Cuartelejo means far away home and is on the national register of historic places.  This site is significant because it is the most northern Pueblo Indian Ruins in the US.

In the 1660’s a group of Taos Indians did not like the Spanish rule in what is now New Mexico, and they decided to move to Kansas to be left alone. They lived alongside the Kiowa Apache tribe that occupied the area. They built their pueblos, hunted and farmed crops occupying the area at Lake Scott for ten years.

Today, the site is just the outlines of foundations of what could be buildings in the middle of the field. Not much to see there, but I found the history of the site interesting.

I had many questions regarding what made the Indians so mad that they left their tribes. Evidently, when the Spanish occupied the New Mexico area, they kept sending people through the area and including missionaries. It was the missionaries that had the biggest negative impact on the native peoples. The missionaries in their zeal to bring Catholicism to the Indian people banned all the indigenous population’s religions as well as any icons affiliated with their religion.

For these tribes, Kachina dolls are an important part of their belief system which had been banned by Spanish missionaries. Kachina dolls are believed to have divine spirits in them. These spirits that inhabit a Kachina doll could be a natural element, animal or the deceased ancestor.  A group of people in the Taos tribe got fed up and decided to leave their homes and make a new home where they could live their lives how they wanted, in peace. Unfortunately, that wasn’t good enough for the Spanish who felt they needed to go and make the Taos people go back to New Mexico.  Then another tribe settled in the area in the same pueblos, and the Spanish came back and forced these people back to New Mexico. Then the French Canadians came in and opened a trading post in the pueblos. After that, the pueblos lay abandoned for a hundred years and had been unknown by Americans until 1898 when it was rediscovered and designated as an archeology dig site.