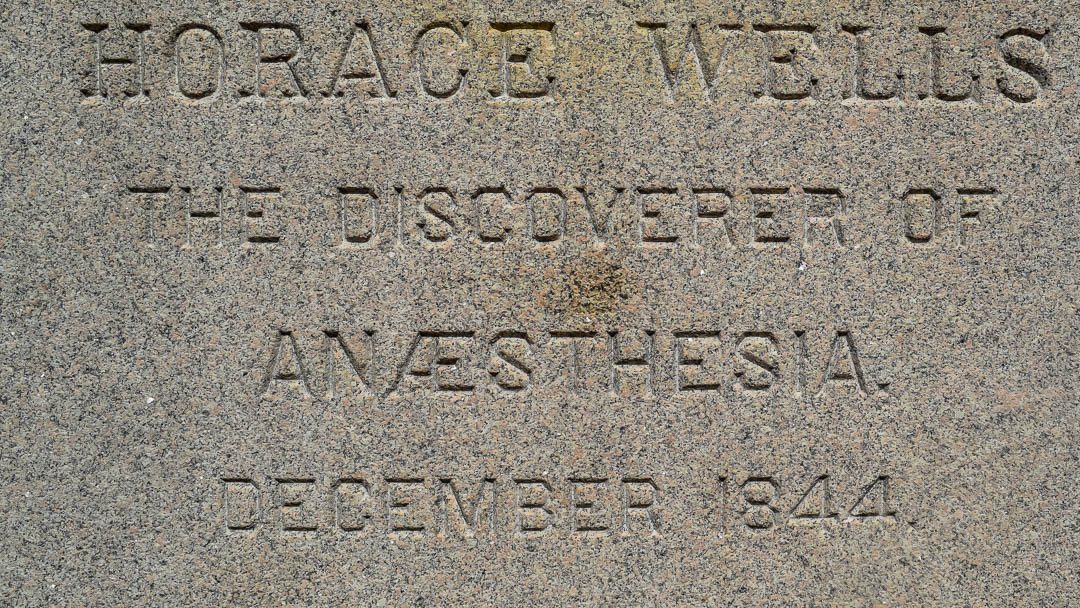 Horace Wells was a man in search of recognition and greatness, to leave a legacy to the world. This is a tragic tale of addiction, madness, and death. I know, this is dramatic sounding, but read on. This is all true. It always amazes me how history seems to paint certain individuals as a hero or a wonderful individual who did something great. Later to discover when you scratch below the surface, Horace had some serious issues.

Meeting Horace Wells in the Cemetary

My first introduced to Horace Wells as the father of anesthesia while letterboxing in Cedar Hill Cemetery in Hartford. I may do a Blog on that Cemetery because it’s remarkable, but I digress. I made a mental note of Mr. Wells and carried on.

Connecticut has a rich past. It is humbling to know this little state influenced the forming of our great nation. I am proud to be a native of the Constitution state. When you look at it, one of Connecticut’s most celebrated stories and heroes is, a tree (a subject for another blog). Put in context, it’s easy to get we must claim what we can. I mean, when you think about it, we can only go up from there. 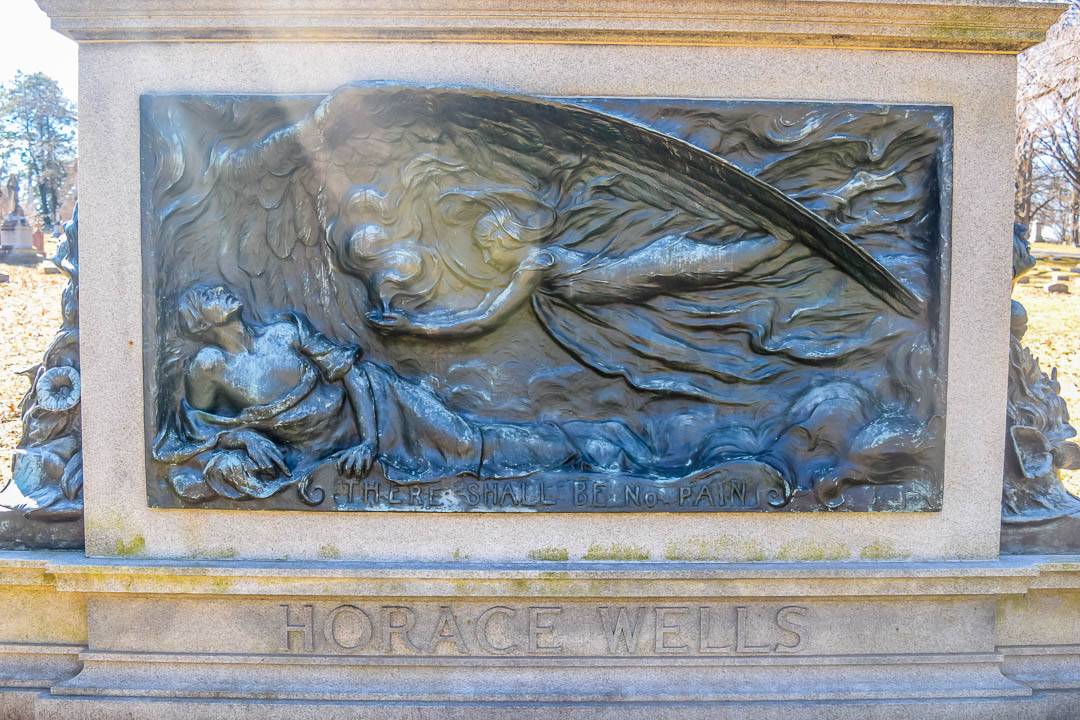 Meeting Horace Wells in the Park

Years afterward, while doing one of my fabulous (even if I say so myself), Hartford Historic Walking Tours, I rediscovered Horace. One stop along my tour is Bushnell Park where I regale my guests with the history of this special place.

Bushnell Park is the Central Park of Hartford Connecticut. In Bushnell Park stands a statue of a distinguished-looking gentleman, replete with a long cape. The pose suggesting this person is all that and ten bags of chips. This statue is a tribute to an auspicious appearing gentleman, Horace Wells, the inventor of anesthesia.

In the early days of my tour, I would mention him in passing as the father of anesthesia. On one of my tours I thought to myself, “Hey, I should investigate specifics about this guy who discovered anesthesia.” I figured that finding out a little about him would enhance my tour.

Dashed Hopes and a Tale of Woe

It was exciting to get to discover the story of this man of prominence in Hartford’s history. I expected to find he would be so great and have a story to make Hartford proud.

Doing my research, I found an amazing story. Not one of greatness, but a tale of a wretched and tortured soul. Horace would not have been my first pick to lay a claim to, but I’ll let you be the judge.

While doing the research, I kept reminding myself “Remember, this is Connecticut we are talking about. We really can’t afford to be too picky., we suffer from the pass-through and middle child syndrome.

Connecticut natives understand this feeling all too well. We have no major league sports teams. The only one we had, a hockey team known as the Hartford Whalers, ironically moved to a warmer climate. Now we have people decades later who still hope that maybe the NHL and the Whalers might come back.

To put that into perspective, for us in Connecticut, we need to get our designations and our 15 minutes of fame where we can. It’s kind of slim pickings.

Back to Mr. Wells.

Horace Wells grew up in Vermont, attended schools in New Hampshire and Massachusets. He made his mom and dad proud because he grew up to become a dentist. He worked in Baltimore MD before opening a practice in Hartford CT. 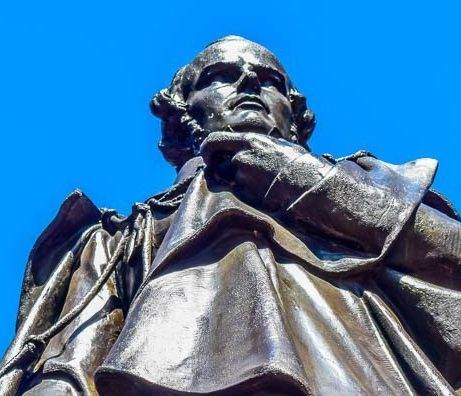 Horace was a good dentist. He wrote recognized papers on the benefits of good oral hygiene was ahead of his time. His dentistry practice occurred in the mid-1800s. Back then, there was nothing to help comfort the patient with tooth pain. There was no novocaine, no anesthesia. Luckily they had lots of whiskey. People had to suck it up and deal with the pain of going to the dentist.

Nitrous Oxide is a Laughing Matter

He had been fooling around (literally) with nitrous oxide at a demonstration. One more like a sideshow attraction that a scientific symposium. Come to Hartford and have fun with laughing gas!!!

While at the event, someone got high on nitrous oxide and banged his legs hard and didn’t even feel it and Horace witnessed it. So the lightbulb went off that gave Horace an idea.

What did he do next? Well, as any dedicated scientist in almost any horror flick, he experimented on himself. Oh, yes he did! I can envision the conversation now. To his assistant he says “Dude come here, I’m getting high on this stuff and I want you to pull one of my teeth out. You know, to see if it hurts.” When his assistant looked at him he lamented maybe even whined. “Oh please, if you would be so kind as to just pull one little tooth, I’d appreciate it.”

It all went as he hoped. Excited about his discovery, he experimented on a few patients and got similar outcomes. He was now ready to share this with the world.

So, he showed this wonder drug to the physicians up in Boston. There he was in an auditorium with all the other doctors and dentists looking on. There was a patient who needed to have a tooth pulled. During the procedure, the patient cried out in pain “Oooowww”, indicating the failure of the experiment. It’s speculated that an incorrect dosage was given.

There he was with all of his peers watching this and they said, “Humbug,” calling him a hack and a fraud who doesn’t know what he’s doing.

The man that was having his tooth extracted after the effects of the drugs wore off said he didn’t remember a thing or have any pain. It didn’t matter because the other doctors had made up their minds. Poor Horace left in disgrace.

He tried to gain recognition in the United States for being the inventor of anesthesia, but they told him no.  I would like to point out here that a gentleman by the name of Colton who brought the laughing gas in that side show attraction to Connecticut. So Mr Wells didn’t discover the nitrous oxide laughing gas or anesthesia. He was smart enough to apply the use of the gas to help his patients.

Horace would not stand for them rejecting his claim of being the discoverer of anesthesia. He’ll show them!!!! He went to France where he convinced the French physicians to designate him as the inventor of anesthesia. Horace came back a venerated man. 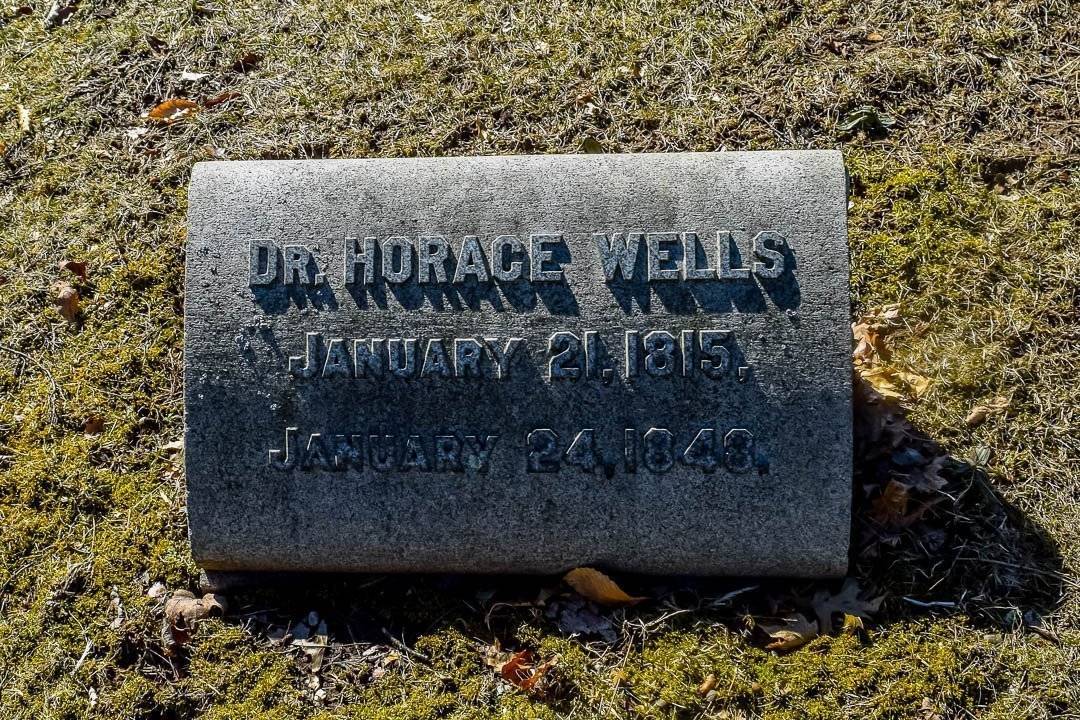 Horace continued to experiment with different drugs. He experimented on himself with ether and chloroform.  This is where the story gets dark. He got himself addicted to the chloroform. He left his family to go to New York. On a chloroform bender one day, when he tied one on, self-experimenting, he went out to the streets, and we don’t know what actually happened, but he ended up throwing acid on two prostitutes. The prostitutes were ok, but their clothes, not so much. Off goes Horace to jail.

Now back in the day, they must have had a much different penal code than today. He told his jailors he needed his shaving kit. So naturally, they released him and let him go home to get his shaving kit. ‘Cuz yeah, that makes sense to do. When he got that shaving kit, he used it to kill himself. Someone noted, that when he had sobered up from the drugs, he had expressed remorse over what he had done.

What an incredibly sad story of intrigue and madness.

Somehow this man is now a celebrated hero.   Horace Wells the inventor of anesthesia.

I often wonder if Horace was the inspiration for the story of Dr. Jekyll and Mr. Hyde. It was first published in 1886. Horace died in 1848. A story of a man obsessed with changing himself to get recognition, self-experimentation, madness and hopelessness. Makes you go hmm.