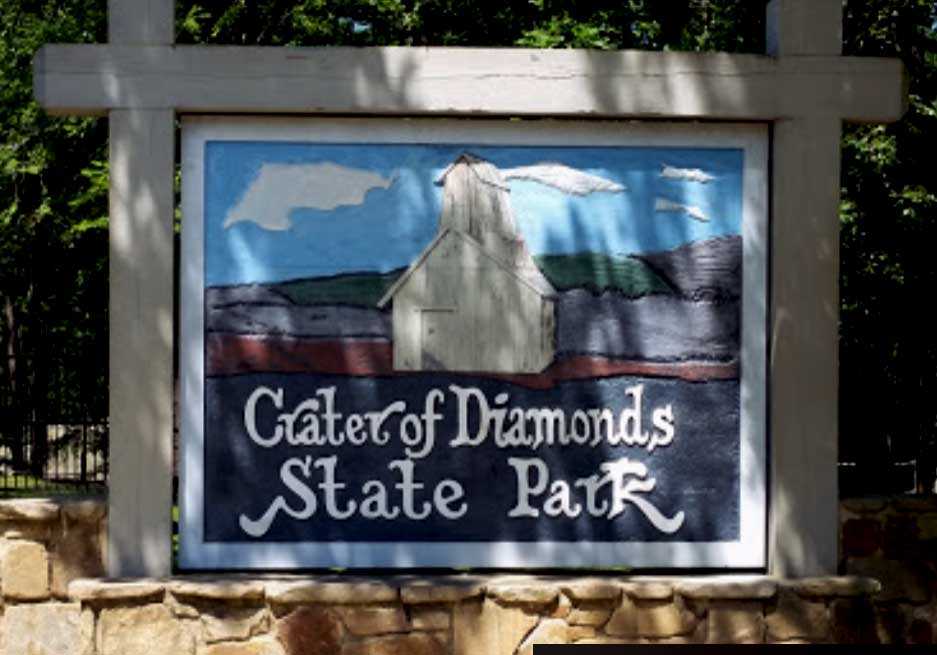 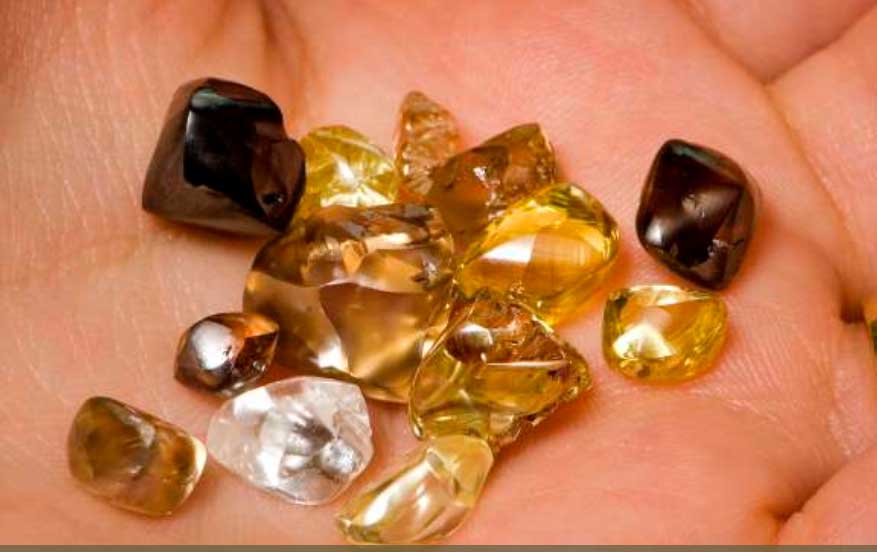 Crossing the border into Arkansas, there is a big overhead state sign stating that Arkansas is the Natural State. I thought, “hmm, I didn’t know that”. I would have expected West Virginia or Montana to have such a designation but not Arkansas and it made me wondered why. I discovered that Arkansas is an outdoorsman’s dream with abundant mountains, lakes, rivers, hot springs and best of all, great rocks. If you didn’t know or are not a rock-hound Arkansas is known for its quartz crystal deposits, but the attraction that brought me to Arkansas was Crater of Diamonds State Park.

I had seen a travelogue on the Travel Channel about the Crater of Diamonds, and it had me jazzed to check this out. I was so glad when I did. Crater of Diamonds State Park is the only public diamond mine in the world.

Very nice and knowledgeable people greeted me at the park. They guided me through the whole process. For a nominal fee, you get 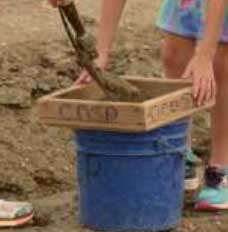 Then you get a little explanation of what you are looking for and how the process works. The diamonds are real diamonds not just quartz miscalled diamonds, as with Herkimer diamonds in NY (which I love, but that is a story for another blog.)

The park employees recommended paying to get the “boots”.  These “boots” are made of the same material as Playtex living gloves. They are even the same bright-yellow color as the gloves. I took one look at them and thought with gusto, “Oh Hell no!” because I was way too vain (or too cool, in my own mind) to even think about wearing something as tacky as that. “I don’t mind getting dirty,” I said.

They looked lovingly at me and said, “Well, okay, if you are sure about that.”

I can say that not getting the funky yellow Playtex living boots was a terrible decision on my part. I found out the hard way. Dirt is one thing, but clay-like mud is totally a different thing. Because of my vanity, I ruined a newish pair of good hiking boots during my visit. A LESSON learned. Here is a tip – GET THE BOOTS.

The park does its due diligence for its patrons by providing a large raised platform area for shoe cleaning, including water hoses, boot scrapers, and tools to get the mud out of the treads in your shoes. With that said, and to be perfectly redundant, I highly recommend that if you visit the Crater of Diamonds State Park you spend the little bit of extra money and get the funky yellow Playtex living boots. You will thank me.

Life in a Diamond Mine 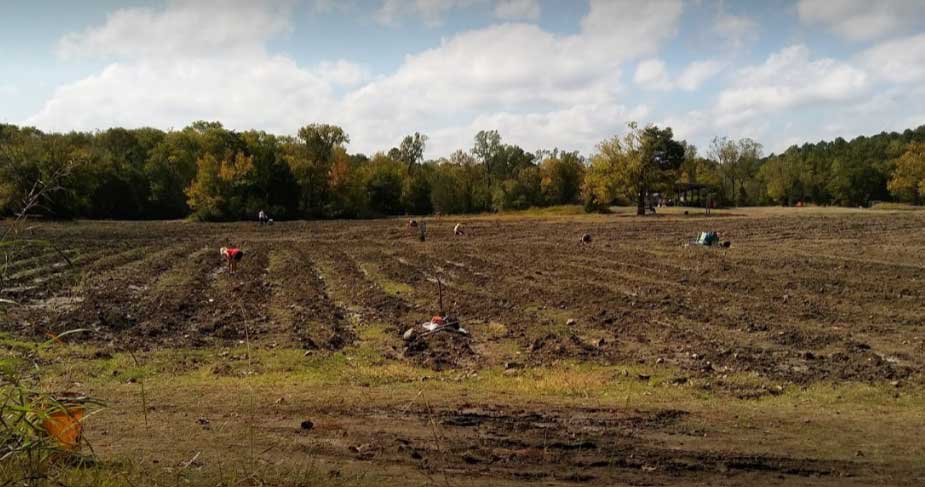 After refusing the boots, they released me to the “mine” area, which is just a big muddy field that gets turned periodically (usually monthly) by a tractor. You pick a spot to dig the dirt and put it into the bucket. The bucket gets heavy, so I recommend only filling the bucket halfway.

At the screening area, are multiple fifty-five-gallon half-drums filled with dirty, muddy water. I grabbed a screen and put some dirt in it, swishing it around in the water. There is something about putting my hands in that dirty mucky water that I love. I think it kind of brings me back to my childhood days of making mud-pies in the backyard.

After about two minutes of screening, I started up a conversation with the other folks screening their dirt. There were people from Texas, Oklahoma, Ohio, Arkansas, myself from Connecticut, and even a woman bass master from Japan! How cool is that?

The Texans in the Diamond Mine, or Friends, the Real Treasure

The Texans were in a rare form that day, and we all just had a fun time making jokes and poking fun at one another. I was especially enamored with the Bass Master, although she did not speak much English there was a man with her that spoke it a little and acted as her interpreter. She was there for a fishing tournament and wanted to see if she could find any diamonds.

It’s been my experience that at these rock mining places, I have met so many fun and interesting people and have always had a great time.  I recommend that if you are traveling alone and get lonely for human conversation and companionship, looking for a local mining establishment will give you a better-than-average opportunity to not only find rock treasures but will find a treasure in making new friends.

Additional Activities at Crater of Diamonds

I would be remiss if I didn’t mention the other facilities and activities offered by Crater of Diamonds. You can conclude a day of digging and sifting for diamonds in the Arkansas heat by cooling off at the Diamond Springs Water Park. Then bed down for the night at the park campground with standard amenities and 47 sites with full hookups.

Though I did not stay here, they appear to have made improvements to the campground since I visited. 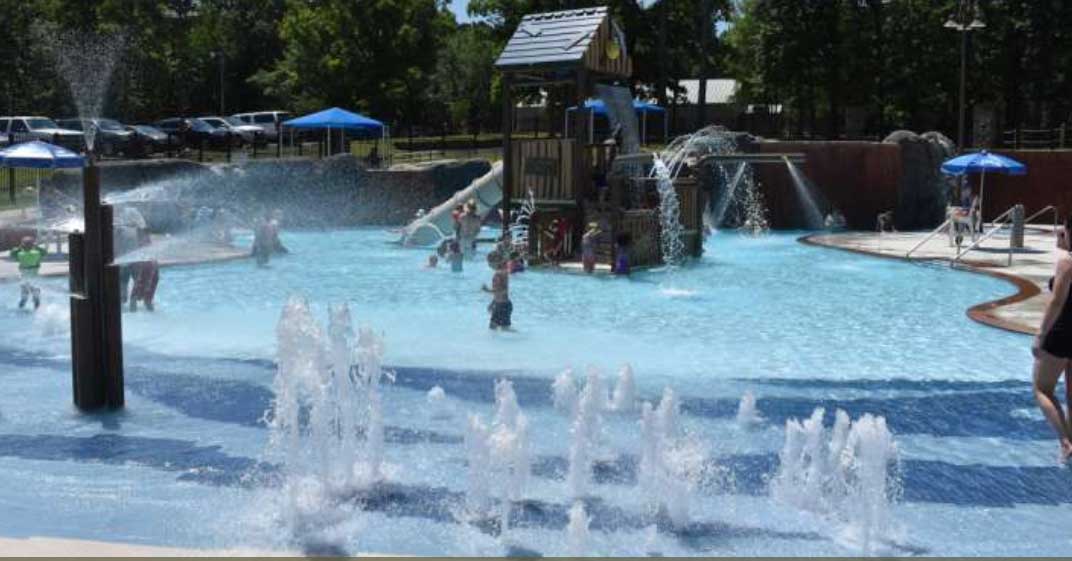 I had a very lovely day! I found two nice pieces of Jasper, but unfortunately, no one found diamonds that day. Crater of Diamonds State Park was a wonderful place and I highly recommend it.