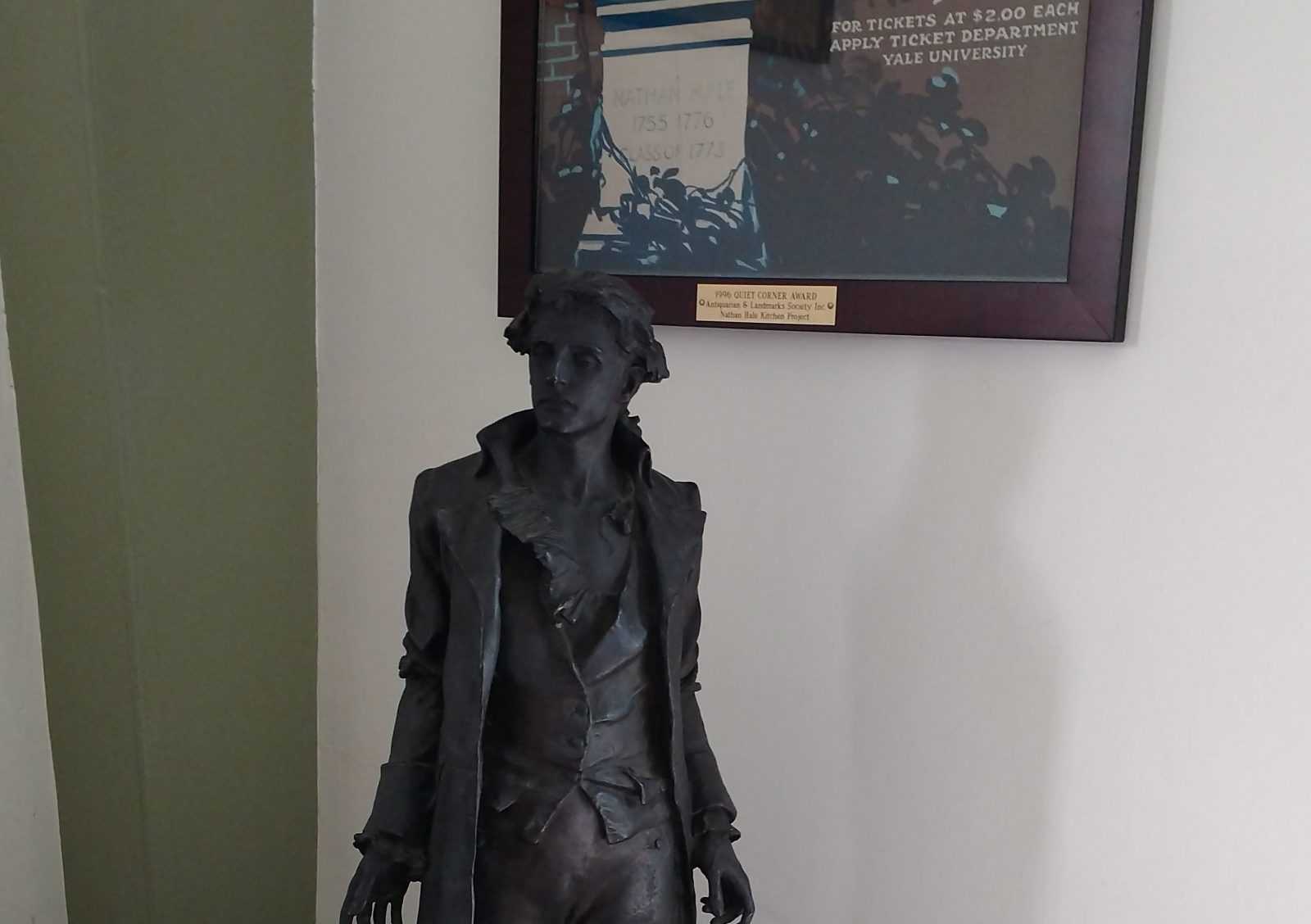 If you read the chapter in my book (Lessons from the Road: USA) on Oregon, you would know that sometimes history paints people in a different light that does not necessarily reflect the true nature of the person or occurrences that are said to have happened. Every now and again, I give a guided historic walking tour of Hartford CT. One of the people that I talk about on my tour, is the state hero Nathan Hale.
Most of the information I received from Nathan Hale was from tours I had attended at the state capitol. I had the pleasure of visiting the Nathan Hale homestead in Coventry CT this weekend. 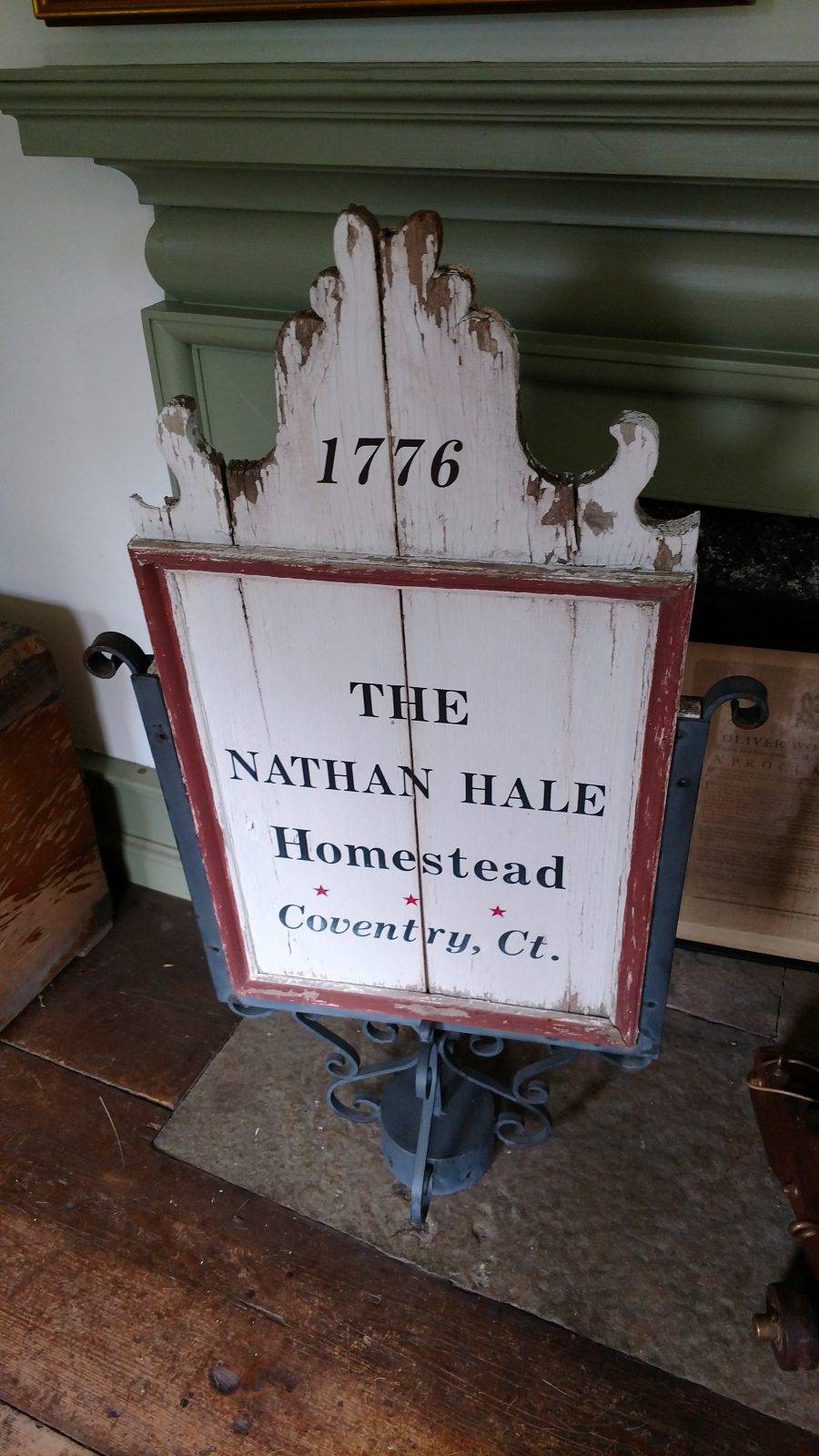 I was anxious to find out any new information that I could add to my own tour regarding my state hero, Nathan Hale.

I ended up being that irritating person on the tour that was a little over exuberant and had a million questions. By the time we got to the second room it was clear I needed to curtail my questions but not before I got the answers to all of my burning questions answered by the awesome Miss Mollie.

Just as a reminder as to why Nathan Hale was significant in American history, he is credited as proclaiming prior to being hung for treason against the British

“I only regret that I have but one life to lose for my country.”

Nathan grew up in a very large family his mother died at childbirth upon the 11th child that was being born. Nathan’s father remarried and his stepmother had seven other children. Nathans father became a wealthy merchant and could afford to send some of the children to college. Nathan’s father was quoted as saying that Nathan was the smartest of all his children, and therefore he would be provided higher education and attended Yale with his older brother Enoch. Back in the day, there were only three degrees that you could earn at Yale. You could earn a degree to be a minister, a school teacher, or a lawyer. Nathan attended Yale at 17 years old and decided upon becoming a school teacher. After school, he began teaching classes.

The revolutionary war was raging and after the Battle of Lexington and Concord, where five of his brothers had fought, he decided that he would join the revolution as well. He decided that he wanted to be a captain. Evidently in those days, you could actually buy your way into the position vs earning it and that’s exactly what he did.

George Washington sent out a request among his troops for folks to be spies in New York and provide intelligence back. Back then there was a strict code of honor regarding warfare and being a spy was not looked upon very well by anyone. Poor George was not getting any of the volunteers he needed. Suddenly, Nathan decided to volunteer for the role.

Nathan went to New York he wasn’t there but two weeks before he got caught. There are two stories being told about how he got caught. I will share both with you. At the state capitol, the story is being told that he had a cousin who was loyal to Britian and saw Nathan in New York and knew he was a rebel. Nathan’s cousin ratted him out to the British.

The story at the Hale Homestead on how Nathan was caught was that a British officer went to him and said “Hey, guess what? I’m a spy for the Revolution.” and Nathan said “Me too!” Ever meet that guy that was a genius, absolutely brilliant and yet had no common sense whatsoever? Yeah, I think Nathan kind of suffered from that.

To make matters worse once they caught him they found that he had kept notes on paper in his shoes and socks which incriminated him. Evidently he was a bit of a pompous ass as well, and figured that because he was so educated that he would write everything in Latin and nobody would be able to read it, instead of using a code. Unfortunately for Nathan many people back then read and spoke Latin because it was the church’s language.

There was some conjecture among historians as to whether Nathan actually said those famous words that he was credited for saying that “I regret that I have but one life to live for my country.”

Those words were very significant because there really was no “country” at the time as far as the British we’re concerned. It was the first public acknowledgement of the United States of America. Although some historians do not believe that Nathan Hale said those famous words. The folks at the Nathan Hale Homestead beleive that he did say these words, due to discovery of an entry in a ledger from a British officer that documenting the hanging and he indicated that Nathan had said those words.

Sadly, No one knows what became of Nathan other than there was an account that his body was left hanging for 5 days. Nobody knows where his body ended up after that.

All of the statues and pictures of Nathan are only artists interpretations. There are no pictures of Nathan so we do not know what he looks like. Given that there are pictures of some of his relatives, including his father and brothers, chances are he did not look anything like the artist’s renderings.

So there you have it. Nathan Hale in a nutshell. Hero or dumbass, you decide. I like to think he is a little bit of both.

I’d love to hear your opinion on whether Nathan is a hero or a dumbass please put your comments in the blog.

P.S. The Nathan Hale Homestead is very close to the awesome Coventry Farmers Market. Which by all accounts, is the best Farmers market in all of New England. I hear they have all kinds of things to see and do as well as live musical performances at the market. So make a day of it and check both out on the same day. The market is seasonal from the weekend after Memorial weekend to the beginning of October.