Bok Tower – A gift of beauty and vision to the US 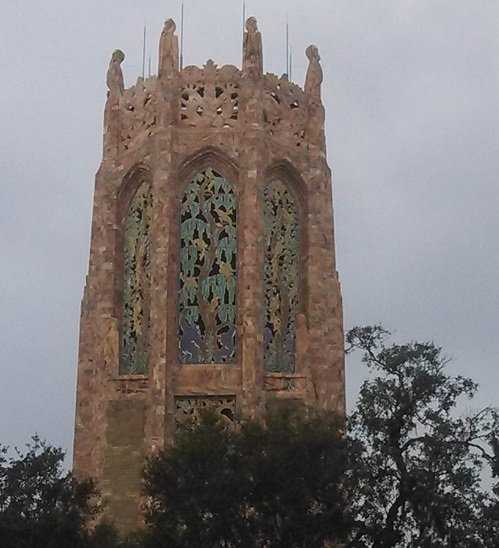 A Gift from a Man of Vision

Edward Bok was a man of vision, as well as a man of generosity, who gave this world and this country a most wonderful gift: Bok Tower in Lake Wales, FL.

Bok Tower is a singing tower that has a carillon. According to the boktowergardens.org website, “A carillon is a musical instrument consisting of at least 23 cast bronze bells that are precisely tuned in a chromatic progression so that music in any key can be played. Unlike other types of bells, carillon bells are fixed in a frame, the bells do not move. Instead, the clapper inside the bell moves. Because of its weight and size, the carillon is one of the largest of all instruments. A carillon is played from a keyboard on which the keys are depressed by a player’s (carillonneur) closed hands and feet. The keys are connected to the clappers by vertical and horizontal wires.” (not sure if this was the end of the website quote) Bok Tower has 60 bells.

I also did not realize that the tower was a carillon until I got there.

According to http://boktowergardens.org: “The singing tower is 7 stories tall (205 feet). Neo-gothic and art deco in architectural style. It is made of coquina stone from St. Augustine, Florida and pink and gray marble from Tate, Georgia. The tower was ornately crafted with beautiful depictions of birds and wildlife.”

I had the pleasure of going to Bok Tower and gardens on a 2014 trip to Florida. Unknown to me, the day I visited, was an outreach day where the public could go for free. This is an annual event which includes a full day celebration. On this particular day and year, it was a celebration to commemorate the 85th anniversary of Bok Tower.  There was a full day of music, ceremonies, and wonderful festivities.

The Tower was built on a hill which the locals affectionately call a mountain. I’ve seen sand dunes at beaches in New England bigger than this “mountain”, however, you cannot deny the beauty of this place. There are botanical gardens all around the tower and the view overlooking orange groves reminds me of the vineyards. There really is no bad view from the property.

The tower is the crowning jewel of this wonderful national landmark.

Where it all got started

One of the items in the celebration that day was a speech presented by a member of the Bok family. In his speech, he urged everyone to think about how this area would look in the 1920’s. Essentially this place was a mound of sand in the middle of nowhere. Edward had a vision for the mound of sand which has been realized.

He indicated that Edward Bok had grown up hearing fantastical stories of his great-grandfather. Edward’s family originally came from the Netherlands. His great-grandfather was asked to go bring law and order to a lawless desolate island off the coast of the Netherlands. Evidently, this area was so rocky, that plants did not grow there. It was a harsh existence for the people who lived there, and the inhabitants evidently made their living by picking “flotsam and jetsam” from shipwrecks, and killing survivors that came ashore to steal whatever the victims had on them at the time.

Edward’s great-grandfather accepted the position and did a good job. He decided that he liked the area so much that he bought property there and brought his wife.  Everyone thought he was crazy to go to a place where there was nothing but rocks. His response was “An ugly place is ugly only because it is not beautiful.”

He went on to plant the first trees the island had ever seen, and planted new trees every year for the 50 years he lived there.

Eventually, the birds took notice. Within a few years, there were so many birds that the island started attracting the people of the mainland to view beautiful and rare bird species.

I was so taken in by this story!

Having been to the Netherlands I knew the people there are very innovative, but more importantly intrepid.  The Bok family speaker spoke of the impact the story had on Edward Bok as a small child, hearing of his great-grandparents accomplishments, and being a part of this family legacy.

“Make the world a bit more beautiful and better because you have been in it.”

What a wise woman.

Well, Edward grew up. Being an industrious and enterprising person from an early age, Edward made a name for himself as well as a fortune. Edward decided to make the world a more beautiful and, I think, a better place.

He generously gifted the Bok Tower to the people of the United States.

Some features of the lovely Bok Tower 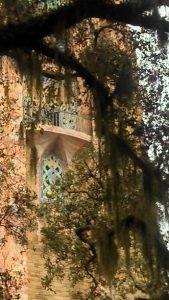 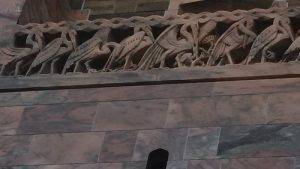 One feature of the tower that stood out in my mind, is a brass door with raised panels depicting the book of Genesis. Unfortunately, there is only one entrance and exit so, as a docent informed me, as I went to walk up into the tour, the fire marshal cannot approve the general public to be able to go inside the tower, although for a special membership fee there are some rare opportunities for the members to take a tour of the tower.

One of my favorite features is the beautiful and colorful grills that cover the bell-chamber windows. The colorful grills are made of metal and tiles that remind me of cloisonné. 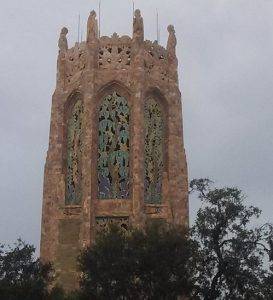 Top of the Tower

I was lucky to be there at a time that was overcast and a day that had been raining earlier. Like the bright colors of a shell wet from the ocean, the colors in the tower were brilliant with the striations in the stone. 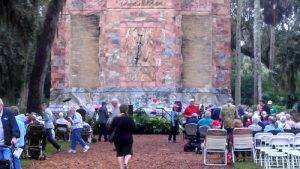 I love it when I just luck into discoveries like this one. Not knowing what to expect I figured it was going to be a quick trip in and out to say I saw a tower. My experience was filled with a full day of music, celebration, beauty, vision, and inspiration for my soul. Thank you, Edward Bok you indeed made this place better because you were in it. Your grandmother would be proud.

What are your favorite out of the way and little known Florida attractions?